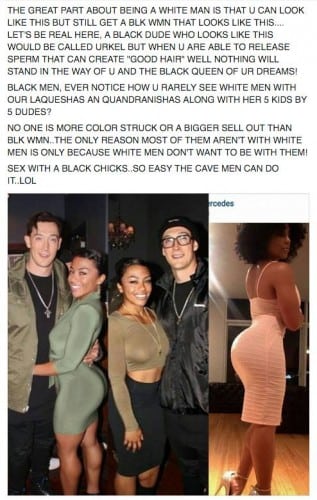 Sounds like a lot of sour grapes to me.

When I first read it, I couldn’t believe the sense of entitlement this man had, considering he’s called for the extermination of black women, and has unapologetically voiced his hatred for most of them. Worse, when he was dating a white woman, he encouraged all black men to leave black women alone and get themselves a “snow queen.” He’s like the typical bitter black male–they hate us, but still want to fuck us.

The man in question thinks he’s entitled to a “flawless” black woman even though he is a self-admitted cheater, has babies peppered all over the place, and makes a living dragging black women’s image on You Tube. Not one time did he understand that these “flawless” black women are going to average looking white men because they may have something to offer other than a big dick. Maybe, just maybe, they are treated more kindly, appreciated, and building with men who share their values, not just their melanin content. Some of today’s black men are so girlish that they look at a white man’s looks without factoring in anything else–like maybe dude is average but is BRILLIANT and displays COMPETENCY to be a good provider, protector and producer.

Social media maven and empowerment superstar, Breukelen Bleu wrote a post this morning that was brilliant and a must read. Here’s a little bit:

Focusing on looks for long term partnership is LAZY and LOW CLASS. Attraction is good but you can become attracted to just about anybody if they treat you well enough! Where has focusing on facial features and dick size gotten black women? NOWHERE. An 8 inch dick won’t put you in a beautiful home or send your kids to college. Black women’s focus on ‘swag’ and looks is the DIRECT RESULT of our having had to LOWER OUR STANDARDS to accommodate the FAILURE OF BLACK MALES. The less those [redacted] achieve, the more low class our criteria has become. This was done ON PURPOSE. You cant have the women of a race requiring more than the men of the race can provide. Eventually those women will LEAVE and find what they are looking for somewhere else. The best way to keep the race going, is to keep the womens vetting process in tune with the mens ability to achieve. When all else fails, make DICK and LOOKS the most important traits, and the women will ALWAYS come back for more. Give them permission to demand anything else, and they will LEAVE THE COMMUNITY. Black folk will NEVER allow THAT SHIT.
.
EVER.

9 weeks out: I know I have a long way to go but happy with progress. apparently cardio and diet does work lol. The diet has left me feeling a little less energetic but nothing to bitch about. Diet gets cut again next week and cardio doubles. As soon as I think I have it, it changes lol. #keeppushing #teamhixson #mealpros #benjaminsdaily #collectivestatus . . . . . #treadmill #gainz #workout #getStrong #getfit #justdoit #youcandoit #bodybuilding #fitspiration #cardio #ripped #gym #geekabs #crossfit #beachbody #exercise #weightraining #gymtime #training #shredded #teamrsp #rspnutrition


Now that a notable amount of black women are discovering that they could do no worse (or even better) by expanding their dating pool, the narrative about the “white devil only wanted you for sex” is falling on barren soil. With a 73% out-of-wedlock rate in the black community, it’s pretty clear who’s using whom for sex. Dating white men ain’t just about getting “pretty” babies, but if you do, you’re more likely to be MARRIED to him when the baby comes.

And to all the newbies who I know are reading this thread, you need to buy my book, Swirling: How to Date, Mate and Relate, Mixing Race, Culture and Creed.